Getting the best out of Educause

Getting the best out of Educause: conference round up

As I sit on the A-Train (officially called the University of Colorado A Line for sponsorship reasons) from Denver to the airport, I’m reflecting a little on the events in Denver at Educause, which I was able to attend courtesy of a UCISA bursary. It has been the most rewarding conference experience. The younger me would have been overawed at the sheer size of this event, but after having presented at and attended conferences for the last 20 years, I felt ready for it.
The backdrop to this conference is of a world which has various parts in chaos. In the UK HE sector, it’s been a tricky year, with a once-in-a-generation strike affecting much of the sector (concerning pensions), and institutions looking for more and better systems to support and improve their student experiences. Blockchain is background noise. Cloud is commonplace now. The MOOC bubble has burst a bit (in the UK at least).
One of the big themes of the conference was around diversity, equity and inclusion. These are areas that have resonated in many places in the last few years, with politics in the UK and the US appearing to veer off in the opposite direction to this right now.
I’ve thrown myself in headlong to each day, up at silly o’clock every day to take part in “braindates”, sharing experiences of learning technology with international colleagues from universities, and a nice guy from a start-up who are looking to get into the world of online learning with an interesting web tool. The tables and chairs inside the corrugated cardboard booths were perfectly pleasant. The 1970s “Barbarella” style swinging chairs were less conducive to a friendly chat. 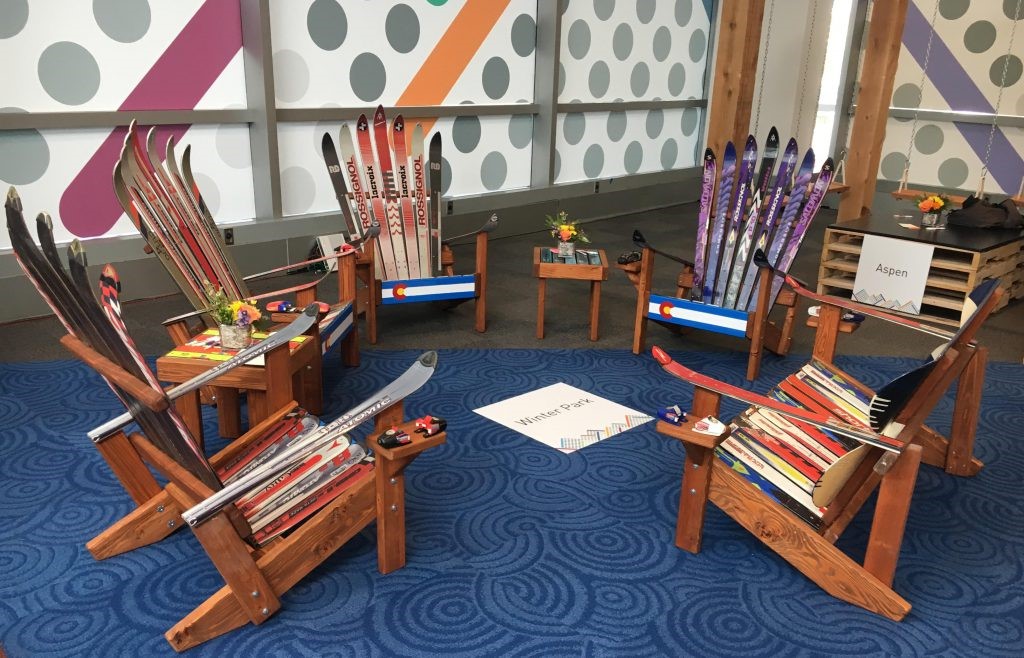 However, nothing was as bad as the chairs made out of skis, which were massively uncomfortable and almost impossible to get out of! You might also spot some swings in the background – it’s hard to talk about serious subjects when wobbling around on a swing. 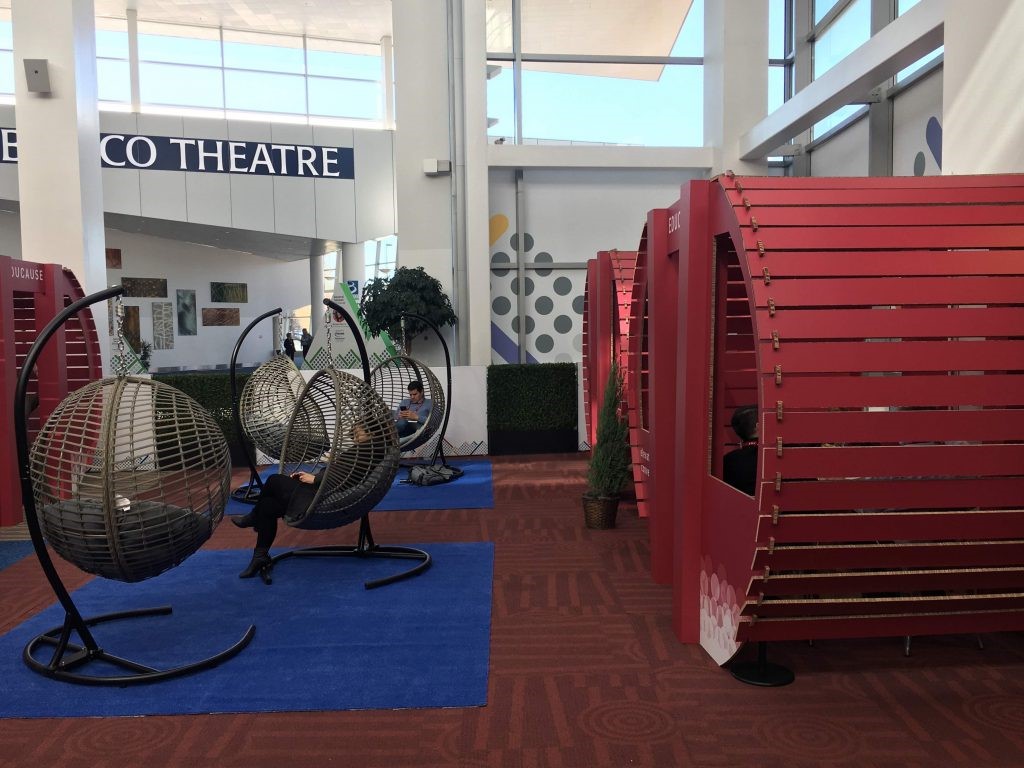 The conference schedule was absolutely crammed with loads of conflicting sessions, and it’s the sign of an engaging conference when there’s so much to go to and too much to choose from. I hope I made the right choices, but I’ll never know. Sessions on learning analytics dashboards, student data, accessibility, ITIL, change management, projects and relationships, privacy and ethics and onboarding were certainly a varied bunch, with a good mix of listening and more interactive sessions.
The exhibition was enormous. There were 333 of them to choose from, with multiple Google stands (including half a basketball court), an enormous Service Now stand and plenty of the usual suspects with massive stands. Technology has become a tool which guides change.
Far more interesting to talk to the smaller providers and those in “start-up alley”. Once you’ve seen the latest laptop from Lenovo or Dell or a Microsoft Surface once, you’ve seen them enough. Some familiar faces on the Moodle stand and there were a few other suppliers there to chat with about existing projects. It was very handy for one project we were currently working on, as I could show something to the supplier which they could relay back to their implementation team, as we both happened to be in the same time zone for once!
There’s so much still to reflect upon and that will happen naturally over the next year when thinking back to some of these conference experiences and the presentations that were shared. There’s been a very lively social media community on the #edu18 hashtag too. Communication and collaboration have been key themes that I will try to take into 2019.
I’ll leave you with a last image of Colorado, a slightly blurry view of the Rocky Mountains that have always been visible from somewhere each day. This was the view from the train on the way to the airport. 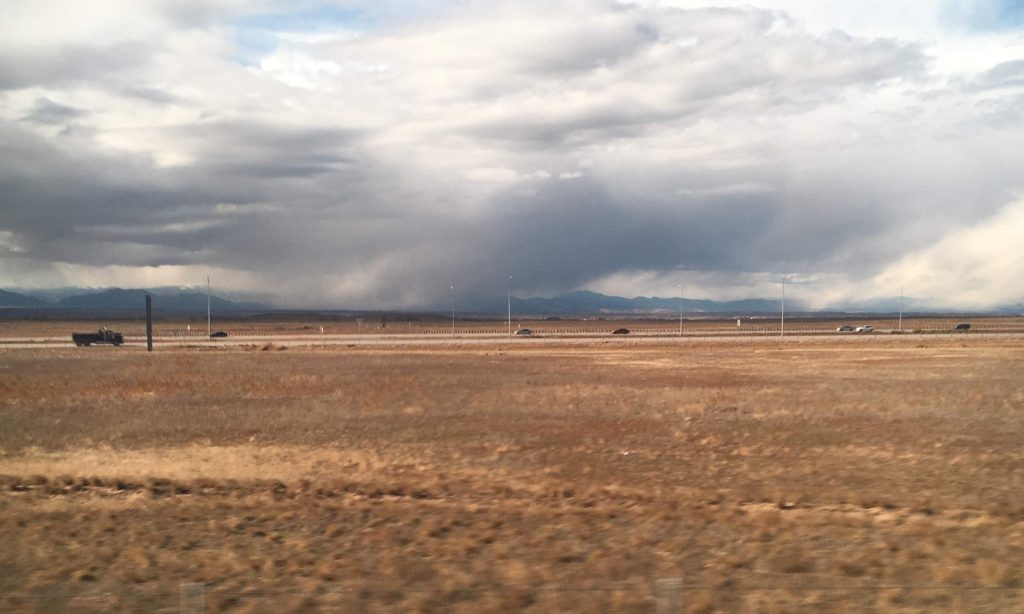 A fantastic conference experience in an amazing city. Before coming here I would never have put Denver on my “cities to visit” list. Having been here, I’m eager to come back and explore more. It’s very much an “outdoor city” with so much provision for walking and cycling, far more than I’d been expecting. You can explore so much on foot, or catch trains, buses and trams.
Au revoir Denver. Thanks again to ucisa and the ucisa bursary scheme for giving me this opportunity. Look out for the 2019 edition of the scheme around February/March for your chance to attend an event that you might otherwise be unable to attend. You can read all of my posts here.