Supplier panel write up from the ucisa Supplier day event

It is often said that strong relationships are built on honest, two way communication. The Supplier Panel at the recent ucisa Supplier Day showed that there is certainly an appetite for exactly this kind of dialogue between universities and their corporate partners.

The format of the session was very simple – a panel of suppliers answering questions and engaging in conversation about their experiences in working with Higher Education. The level of engagement and passion from the panel, and from the audience, changed the session into more of a free form discussion. Generally speaking, though, it was clear that suppliers greatly value their University customers, for commercial reasons and also as partners in innovation. The culture of learning is one that resonates with many of the suppliers, who respect the difference that a university education can make to the lives and prospects of the students.

One of the key frustrations expressed by the supplier panel was of how often they encounter procurement specifications that appear to have been written with a particular solution already in mind. The overwhelming majority said that they have seen this, and the overwhelming majority said that they see this often. This reduces their desire to invest fully in that tender, and to consider properly any future tenders from that University. This was framed as a “breakdown in trust” between supplier and customer, and was closely linked to a “lack of feedback” from unsuccessful tenders as a barrier to better working relationships. “Honesty” was quoted as being very important, with the motivation not being to challenge a decision but simply so that businesses could decide where to apply valuable resource best. The challenge from suppliers was simple – can we not look at ways to make procurement compliant without having to obtain three unwanted quotes or run an irrelevant tender that will “waste a lot of everyone’s time, just to tick some boxes.”

Engagement routes were also discussed in detail, and how suppliers can engage in the right way with the right people. Finding the right level to make an approach, and picking the right time to approach were seen as challenging. For some stakeholders, the traditional paper handout and give away on an exhibition stall works well, whilst others prefer more innovative and interactive displays. Themed networking events and sponsorship of activities that might appear tangentially linked to IT – such as diversity and inclusion, and sustainability – were identified as creative opportunities for building relationships.

There were also challenges back from the floor about providing suppliers with up to date information that can be seen as critical in a tender process. This includes security policies and technical guidelines that can be critical to system design but which are not always easy for an external partner to get hold of. The use of frameworks was discussed, with the observation that they were good for the suppliers who were on them already, but problematic for suppliers who might need to wait several years for a chance to be added. GCloud was discussed as a more open alternative to the consortia frameworks, with some polarised opinions on its value as a route to market.

As a final observation – the session opened with each supplier offering two words to describe their relationship with HE. These words were – “evolution, innovation, engaging perceptions, painful, diverse perspectives, courage, heart and fun.” These ten words sum up the excitement that many suppliers feel when working with universities and some of the frustrations that can come too. There was plenty to build upon from this session, and a clear desire to work together from both sides. The challenge to all parties is to continue this conversation and deliver on some of the potential benefits. 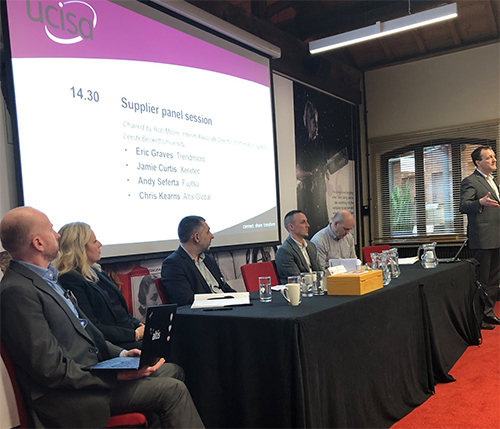