From bursary winner to author 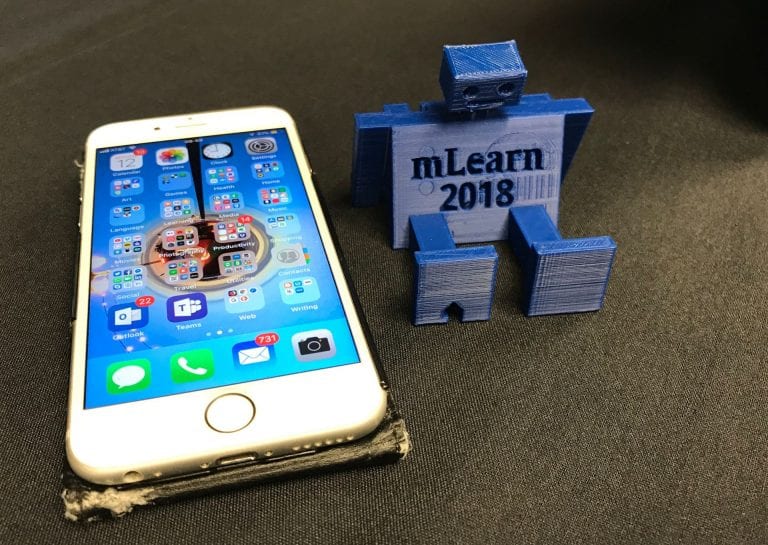 This report is a final reflective dissemination activity on the benefits of receiving a ucisa bursary. It relates to a bursary that enabled me to travel to Chicago in November 2018 to attend and participate in mLearn2018, the 17th World Conference on Mobile and Contextual Learning.

Professional development
The day before I left for Chicago, I received news of a promotion within the team to a more senior role. The conference facilitated by my ucisa bursary was the first international conference that I’d attended outside of Europe. These two events therefore amounted to a landmark week in my own professional development. The Chicago visit was also the first time I’d returned to the US since an undergraduate exchange stay at the University of South Florida in 1994, so the trip had plenty of personal resonance too.

Before the conference, I recorded and edited a video case study with academic colleagues on the use of wireless collaboration at City, which was linked to via QR code on the poster I produced for the conference. Producing the video and the poster gave me an opportunity to learn some of the fundamentals of using Adobe Premiere and InDesign and thus undertake on some software upskilling. On returning, I was inspired to go back to an unpublished internal report on wireless collaboration and repurpose some of the material as part of a six-post series on the themes of this technology specifically and mobile learning more generally.

This blog post series enabled me to develop my thinking further on the wireless project I’d been pursuing since I joined City in 2014. Reflecting on my own work led me to reappraise it and centre it more around the pedagogy of mobile learning than the technology of wireless presentation. Such a reappraisal was made all the more likely by having immersed myself in a global community of practice on mobile learning through participating in the conference.

Being part of such a community also led to additional unexpected opportunities. Shortly after the conference, a communication was sent to delegates for contributions to a new book titled ‘Emerging Technologies in the Curriculum’, co-edited by one of the conference organisers. I submitted an abstract for a chapter on a new topic that I had been looking into – holographic-type technologies for supporting telepresence guest speakers in live teaching contexts. My proposal was accepted, and so the ucisa bursary indirectly led me to write my first book chapter too, which will be due out later this year.

Institution
I was part of a raft of City colleagues that were successful recipients of ucisa bursaries in 2018, a fact that was shared internally by our IT Director in a Staff News publication. I’ve shared my initial application with a team colleague too. While I don’t know whether they also pursued a bursary application themselves, having access to my successful one was clearly helpful to them in considering a submission.

The feedback on the event that I disseminated to colleagues via my posts on our Learning at City blog (some of which were reproduced on the ucisa blog) were well received, as indicated by comments I received verbally and on the blog itself. One of the posts was subsequently recommended to be referred to as part of the reading list on a module on my department’s Masters in Academic Practice programme, which was very pleasing to discover.

A major component to supporting the implementation of wireless collaboration technologies at City has been the notion of having a community of practice to support and sustain this initiative, as the mLearn community does more widely with mobile learning overall. I have come to settle on defining the pedagogical approach that these tools are intended to support as ‘active mobile learning’, and have had a workshop proposal to launch this approach at our internal staff development conference in July. Hopefully, this workshop will act as the inception of a community of practice for active mobile learning at City, and which can also feed any results back to the sector once they emerge.

HE IT community
At ucisa’s invitation, I spoke at a meeting of the London Group about City’s journey towards wireless collaboration in January at London Business School. The audience included several senior IT staff and the talk was well received, leading to discussions with and a visit to Goldsmiths to look at an installation of the same tool we’d used at City.

My ucisa bursary paid for me to attend a conference in Chicago on mobile learning. It also led to a range of other things – directly and indirectly – including enhanced software skills, a reappraisal of my own work, a book chapter, participation in further events, a new pedagogical approach, and the seeds of new networks or communities. In terms of career development, applying for this bursary was probably one of the most productive things I’ve done.


This article was tagged in: